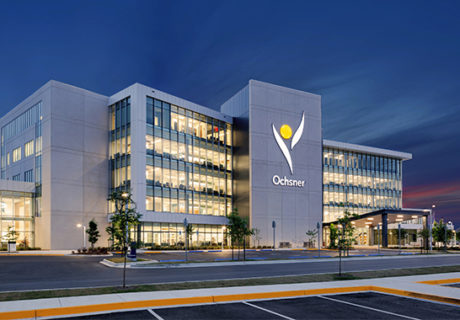 Founded in 1942 as the first multidisciplinary physician practice in New Orleans, Ochsner Health has evolved into the largest non-profit academic healthcare system in Louisiana with 40 owned, operated or affiliated hospitals and specialty hospitals, along with more than 100 health and urgent care centers. Over the past three decades, much of this expansion has been taking place in Baton Rouge, which is located about 80 miles northwest of its hometown, including a 150-bed hospital on the eastern side of the city and about 15 smaller clinics throughout the metropolitan area.

In mid-2019, the system opened the largest single investment in its history, which is the Oceaner Polyclinic – The Grove, A small hospital worth 116 million dollars with a surgical center and a medical office building all under one roof on the west side of town.

Traffic congestion in Baton Rouge was a major factor in the expansion, as commuting in Crosstown was difficult there. “Baton Rouge has some of the worst traffic in the southern Gulf,” says Jay Britch, vice president, attendant at Ochsner Health (New Orleans, Los Angeles). “As a result, we wanted to create a one-stop shop that would reduce the exposure of patients and their families to this traffic by providing access to multiple medical specialties in one visit.”

For example, Brich says Ochsner views the small hospital in the complex as an extension of her current hospital on the eastern side of town. The 10-bed unit, in a one-story suite at one end of the building, has its own entrance and lobby, 10 beds, four operating rooms for treating endometriosis, and 34 beds before / after surgery. The surgical center includes four operating rooms, rooms for endoscopy and interventional imaging, endoscopy treatment, sterile restricted supply, equipment storage, sterile treatment, and lounge / dressing rooms for staff.

The relatively small number of beds in the micro hospitals reflects the increasing focus on outpatient care, made more convenient by the complex’s MOB, which houses 250 examination / treatment rooms, on the first floor “O Bar” (a space similar to the “Apple Genius Bar” which It allows patients and their families to learn about the online services / applications provided by Ochsner), the coffee shop, the radiology laboratory, the retail pharmacy, the vision center, the physiotherapy space with its own entrance and the adjacent parking lot.Clinical care encompasses a variety of specialties, including medicine. Nuclear, pulmonary care and infusion therapy.

In addition to offering a mix of services, the hospital system had another primary goal of development: to help reduce the fear and anxiety that many people feel while seeking medical care. “We have worked hard with our Architectural / Design Partner, Grace Hebert Curtis (GHC; Baton Rouge, Los Angeles), to ensure that all parts of the project work in harmony with one another, ”said Brich.“ The aesthetics of the overall site, combined with the building’s exterior and interior design, create a low-stress environment which helps reduce anxiety between Patients and visitors. “

This objective is first apparent in the entry and exit experience of the complex for those who drive their cars to the facility, with direct access to the provided site via a major highway in addition to a new bridge and service road. As motorists approach the entrances to the complex, they encounter a traffic circle that slows down the movement of vehicles. “Further help from inbound relaxation is a series of stress-relieving steps, including rich landscaping around entrances and a timber-covered house,” says Gerald de Hebert II, GHC president and project manager. Additionally, the large screen element bearing the Ochsner “Life-Mark” logo helps direct the motorists to the visitor.

Inside, admission experiences for both the Small Hospital and MOB provide contemporary hospitality-inspired lobby lobbies with abundant natural light; Decorative and architectural lighting fixtures. And soft organic textures and surfaces. The design team also integrated a central, angled “hinge” into the masterplan, which connects the hospital and the MOB and is anchored on the first floor by the on-site pharmacy. (On the floors above, it is used for medical offices.)

Hebert says the “hinge” serves both aesthetic and operational functions. “The angular element reduces the length of straight interior corridors, avoiding the ‘tunnel effect’ and also allows for greater exposure to the north – and thus more natural light – along the building’s façade,” he explains.

The concept of central organization within the MOB of the complex is the use of modular pods. “The core of every pod includes nurse stations, support areas, service provider work areas, as well as restrooms,” Hebert explains. “The relationship between the Nurse Center and the service provider’s work area creates a group approach to patient care, in which everyone works together, rather than separate provider offices that are not linked to the nurse’s station.”

Each room, in turn, is surrounded by examination rooms, treatment rooms, and access to the clinic from the lobbies on each floor. “With this arrangement, clinics can grow into the adjacent capsule without having to regenerate surrounding patient areas, as there are no obstructions there. In addition, exit staircases, mechanical, electrical, elevators and information technology have been arranged around the perimeter of the building to facilitate the expansion of the clinic from room to room, ”Hebert says.

Designers also paid close attention to the juxtapositions. “The services required are usually grouped together during a single patient encounter or a series of meetings together,” Hebert says. For example, orthopedics is close to imaging and physical therapy. Likewise, ophthalmology is next to the retail vision center. While these common sites and others may seem like small details, they add less stress to the overall patient experience. ”

Adding to the typical challenges associated with projects of this scale, the construction schedule was tight for 24 months. “To help achieve this, the project is designed for rapid deployment and installation using pre-cast curtain walls and massive precast concrete wall panels,” Hebert says. “The HVAC and plumbing systems were manufactured off-site and then lifted into place on site. This innovative approach has accelerated the installation of multiple layers of pipes and systems, keeping the project within budget and schedule.”

British says the facility has been very popular since it opened. As evidence, he noted that some of the veneer space in the building has already been diverted, including the pediatric clinic on the fifth floor of the MOB building expected to open by the end of the year.

Other long-term expansion opportunities included in the complex design include the opportunity to add four additional operating rooms adjacent to the rooms on the first floor of the micro-hospital, a second floor above these operating rooms, and up to three additional floors above the MOB. “It’s practical, efficient, and easy to use for patients, families and staff,” says Britch. “It fully reflects our goal of becoming a model for what a healthcare provider should be in the 21st century.”

Matthew Hall is a Cincinnati-based freelance writer / editor. It can be reached at [email protected].